Royal-imperial church architecture is crowning the historic city centre. The cathedral is definitely not to be missed on any sightseeing trip round Graz. Don’t be fooled by the relatively restrained exterior. The "Gottesplagenbild", an inspiring relic of splendid Gothic fresco painting, is still in excellent condition today. Inside the cathedral, a multitude of ecclesiastical along with general historical treasures is waiting to be discovered.

Today's cathedral reminds of the days when Graz was an imperial city. Emperor Frederick III erected the church together with his new residence in Graz. In the course of history, the cathedral saw many changes. Construction work of the court and parish church in late-Gothic style was started in 1438, as Jesuit church it was refurbished in Baroque style in the late 17th and early 18th centuries. Since 1786 it has been the cathedral, i.e. the bishop's and main church of the Catholics in Styria.

The exterior of the cathedral looks very sober today. In the Gothic period, however, the façades were covered with paintings. One fresco has been preserved - the so-called Gottesplagenbild ("God's Plagues"). It refers to a year of horrors Graz suffered in 1480. The town was struck by three plagues which were considered to be God's punishment - locusts, war and the Black Death. The painting has to be seen as a plea to God for forgiveness and reconciliation. The painter Thomas von Villach arranged the Holy Trinity, saints and the hierarchy of angels as well as the three plagues like an impressive drama demonstrating God's wrath and the plea for mercy, all underlined by medieval "balloons".

The interior of the cathedral hormoniously combines Gothic architecture with Baroque furnishing. The frescos in the church date from the times of Emperor Frederick III. Among them: a fragment showing St. Christopher, clearly recognizable as Frederick wearing the Styrian ducal crown.
The Jesuits, who owned the church for nearly 200 years, had it furnished in magnificent Baroque by the best local and foreign artists. The splendid high altar was designed by Georg Kraxner. But also the pulpit, the choir stalls and the pews are of impressive quality.
Among the most precious objects in the cathedral are the two reliquaries to the left and the right of the chancel entrance. Originally the chests belonged to Paola Gonzaga. In 1477 she married Leonhard of Gorizia and brought along her bridal chests from her native Mantua to Leonhard's castle Bruck near Lienz in East Tyrol. Inlays in bone and ivory represent a poem by Petrarca - "I Trionfi". The artist Andrea Mantegna is assumed to have made them. The couple died without having children. The Jesuits in Graz finally inherited the chests and used them as reliquaries for bones of Christian martyrs.
The organ of the cathedral was built in 1978. All the 5,354 pipes are played and the 73 stops are pulled out at services and organ concerts.

By the way: A masterpiece of the original church furnishing has recently returned to Graz, after many years of renovation in Vienna. Due to its quality and size (274x272 cm), Conrad Laib's painting "Kreuzigung im Gedräng" (Crucifixion) is regarded as one of the best late-Gothic panel paintings in the German-speaking countries. 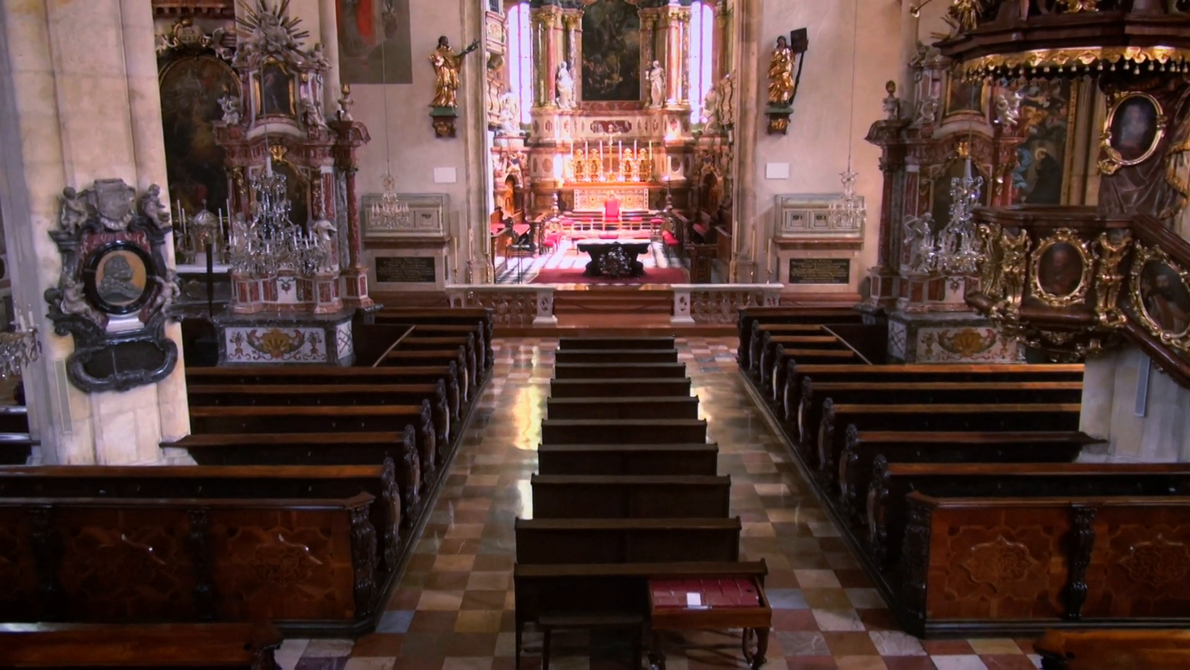